Walt Disney was rascist, and yet he created one of the most beloved children’s franchises in the world.  J.F.K. was a notorious adulterer who led our nation through the Cuban Missile Crisis.  Babe Ruth was a drunk and a womanizer whose contributions to baseball are felt to this day.  None of these things were public knowledge in their lifetimes.

Today, unfortunately, we do know everything about our public figures.  When Tiger Woods was caught cheating public sentiment was so strong that he lost several endorsements contracts as a result.  Bill Clinton most likely cheated on his wife, while in office, got caught, and damaged the presidency while trying to remain in office.  And then there’s Orson Scott Card, whose stand on homosexuality is embarrassing and backward-looking, without any background information on the genetics behind it.  Tiger had been an icon for minorities, and being so dominant in a sport that is traditionally almost exclusively white made his participation even more important.  Clinton’s efforts in foreign affairs were so effective that we are still reaping the benefits of his efforts in China.

I watched Card’s Ender’s Game some time ago.  I was impressed with his concepts of education, leadership, morality, and ethics there.  Since then his various novels have all been highly recommended to me and I intend to follow through with them.  His ability to make social, political, and ethical statements through his characters on the screen was stunning.  I look forward to collecting everything he has written in science fiction so I can follow how he continues to develop those themes and statements.  If he has as much to say about education in the books as I saw in the movie I think that every educator on the planet could learn a great deal from him.  The same goes for leadership and generals and ethics and politicians. 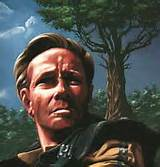 If I ever met Orson Scott Card in person I’m not certain how I would react.  Would I shake his hand, jaw slack, and stumble over some statement of awe about his farsighted vision of the future, or would I be tempted to denounce him as a man with his moral blinders on?  I don’t honestly know.  I do know that when he puts pen to paper in his stories he makes social statements that are in the best traditions of science fiction.  Orson Scott Card is a novelist, like Disney was an entertainer, Kennedy a leader, and Ruth a baseball player.  Yes, he is a flawed human being.  Yes, those flaws stem from an absolute reading of the Bible that lacks any knowledge about its history and context.  But I do not believe that all he has created should be condemned because of this.  Like a savant, his gifts should be appreciated even if his inadequacies cannot be overlooked.

I live with my kitty, and encourage his tuna and catnip addictions. I have a website as well; https://cianbeirdd.wordpress.com/cian-beirdd/
View all posts by Cian Beirdd →
This entry was posted in ComicCon, Sci Fi/Fantasy, Science Fiction and tagged Orson Scott Card. Bookmark the permalink.